With 30 years experience in the industry, Avira has consistently won awards for its software from its inception. In 2016 alone, the German company won over 20 awards and its newest product, Antivirus Pro, was awarded Best Product of the Year by AV Comparatives.

Avira offers both a free and paid version of antivirus software, as well as individual products such as Avira System Speed-Up and Avira VPN. It also offers packages such as Avira Total Security Suite and Avira Prime. The many purchasing options allow consumers to build their own computer protection packages depending on their needs. 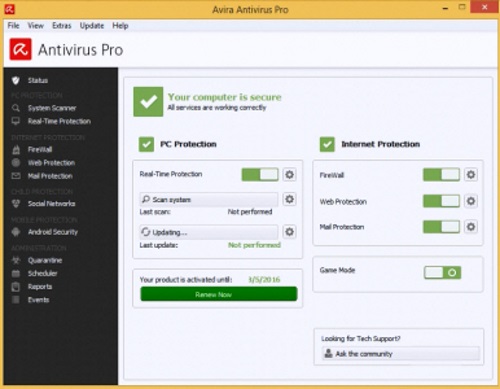 Avira free antivirus offers protection against malware for Windows, Mac, Android, and iOS devices. It can be downloaded free of charge from the company’s website.

Avira Pro is the paid version, and it comes with additional features and protections, such as anti-ransomware and anti-phishing software, device control, identity protection, safe banking and shopping, and data privacy. Users must input a license code in order to receive Avira Pro services, and paying customers have free access to Avira’s customer support team via phone and email. The cost is approximately $45/year.

In terms of effectiveness, AV-Test, an independent testing company, has consistently found Avira software to be very successful at providing sufficient protection. Avira Pro, which was last tested in April 2017, was found to be 98.8% effective against zero-day malware attacks (attacks from viruses that are previously unknown) and 99.9% effective against widespread malware that was discovered in the previous 4 weeks.

Avira free antivirus is easy to use – just download it and follow the prompts for installation. The dashboard is fairly straightforward and the antivirus settings are easy to tweak. The settings can also be adjusted to suit how often you would like your computer scanned.

Avira Pro, the paid antivirus software, is also easy to use. Purchasers receive free tech support and a secure web browser. Pro scans email attachments, constantly updates its database of malware signatures, and blocks known malicious websites. All this is done automatically, but users can also adjust the settings to their own preferences – for example, turning on or off Real-Time Protection, Firewall, Web Protection, Mail Protection and Game Mode.

When something is not right, a red exclamation point will appear next to the issue on the dashboard, which alerts users that they should run a scan or adjust their settings. The software will usually prompt the user toward the correct course of action.

The main issue with Avira, however, is that it can slow down normal computer operation, especially when running the full computer scan. This may be the only downside, especially for people who need a fast-operating system. 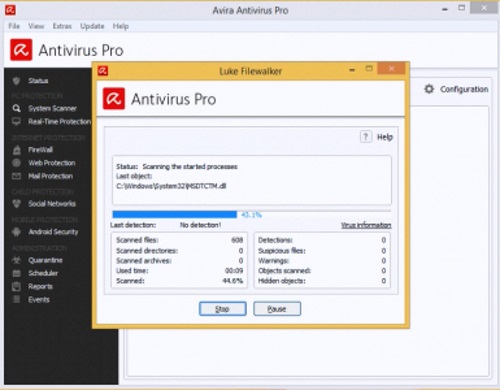 As far as a free antivirus goes, Avira is obviously great value for your money. Its anti-malware has consistently scored high results in tests run by independent companies. However, the protection is decidedly basic. This means that all of the features you receive with Avira Pro – anti-ransomware and anti-phishing software, device control, identity protection, safe banking and shopping, and data privacy – are missing from the free version.

At $45/year, Avira Pro is a bit more expensive than its competitors, but the protection you get is top-quality. Avira Pro won Best Product of the Year in 2016 and has consistently scored high on the tests run by AV-Test. In short, while it does cost a few extra dollars, you are receiving an excellent product.

Users who download the free version of Avira antivirus have access to Avira’s Help pages, customer forum, a threat landscape, and security wordbook. Free consultations with tech experts are also available. However, to receive premium customer support via phone and email, users must provide a license number, which is only given to paying customers.

Help pages and customer support are offered in English, German, and Japanese.

The free version of Avira antivirus is easy to install. Upon installation, you will also be offered a number of other free Avira products, such as a VPN, system speed-up, mobile security, password manager, software updates, and more. Installation takes a few minutes, and once installed, a little Avira icon will appear on the bottom right of your screen. You can then perform security scans and receive alerts when a suspicious website is blocked.

Avira Pro, the paid version, has a similarly easy installation. While some users have reported that it slows down their computer operations, independent testing has showed that Avira software scans internet files fairly quickly, and is on par with most of its competitors, including Norton and McAffee.

Avira free antivirus offers good, basic protection against malware, but for more comprehensive protection, Avira Pro is the better option. Both products can operate on Windows, Mac, Android, and iOS devices, but only Pro includes anti-ransomware and anti-phishing software, device control, identity protection, safe banking and shopping, and data privacy. While Pro is a bit more pricey than its competitors, the price difference is not significant if you are looking for quality protection and accessible customer support.

Avira was founded in Germany over 30 years ago, and its founders have been creating antivirus software from the very beginning of the computer age. The Avira team has continued to adjust and improve its products in-line with the fast development of computer and web technologies. Avira has won numerous awards, including AV Comparatives Best Product of the Year for Avira Pro in 2016. Today, Avira has over 5 million users and offices all over the world, including the United States, China, Russia, Romania, and the Netherlands.