Facebook on Sunday confirmed that its Messenger and Lite apps for Android smartphones routinely collect call and text histories.

The call and text history logging are opt-in features for people using Messenger or Facebook Lite on Android devices, the company said in a post.

The feature is designed to help users stay connected, and it improves the Facebook experience, according to the company.

The Messenger feature can be turned off at any time through the app’s settings. In Facebook Lite, the feature can be deactivated by turning off the Continuous Contacts Upload setting.

When those adjustments are made to the programs, all previously shared call and text history is deleted, Facebook said.

The feature does not collect the content of calls or text messages, Facebook addes, assuring users that their information is stored securely and that it is not sold to third parties.

While the collecting of call and text information has been going on for years — it was introduced into Messenger in 2015 — discovery of the feature surprised some users and raised many hackles. 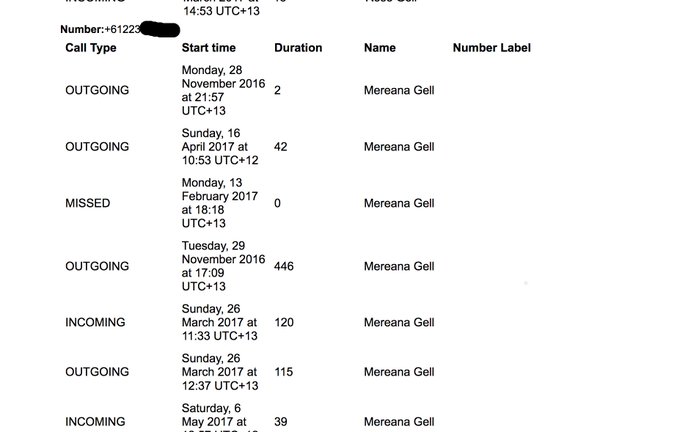 A Twitter user with the handle “Learn Somali” noticed tracking only in connection with a visit to Somalia.

I also have these from my grandmother, covering May-October 2017 pic.twitter.com/0T5PSmZNKc

Thanks for sharing the info, I have looked at mine, and my calls/messages were “tracked” only when I visited Somalia for a month, it started and ended that specific period. Did you travel to a place were FB knows no one will catch them snooping. :). Shocking is the new Normal.

Facebook recorded all of her phone’s contacts, calls and texts from 2015 to 2016, tweeted Natalie Schluter, an associate professor at the University of Copenhagen.

I downloaded my data and FB has a record of ALL contacts/calls/texts ON ANY MEDIUM from my phone 2015-2016.
NB. I’ve never imported any contacts to FB. No FB app on my phone. I do have Messenger (but the upload contacts option is and always has been DESELECTED). https://twitter.com/dylanmckaynz/status/976368845635035138 …

Author Emma Kennedy also was surprised by what she found when she downloaded the trove of data Facebook had on her.

While it appears that Facebook believes it has been up front with what its Messenger and Lite apps do, not everyone agrees.

Facebook wasn’t sufficiently transparent about what it was doing with its apps if even developers and tech-oriented users were surprised, observed Joseph W. Jerome, policy counsel for the Center for Democracy & Technology.

“Part of the challenge is that well-designed transparency is really hard,” he told TechNewsWorld. “As the law understands it, Facebook did get users to opt in to this feature,” he said, “but ‘Turn On’ is bolded and the default choice for users.”

The “Not Now” choice for turning off the feature is grayed out, so it looks like it’s not an available option.

“Technically, Facebook is accurate that users opted in to this, but in the age of Russian meddling and Cambridge Analytica, it’s no excuse in users’ minds,” said Karen North, director of the digital social media program at the USC Annenberg School for Communication and Journalism.

“Even the opt-in excuse is a thin one, given how the opt-in was phrased,” she told TechNewsWorld. “It was misleading.”

However, it’s likely that Facebook’s intentions were not sinister, North added.

“They do it to curate an experience that will engage us,” she said, “and to target us, sell ads and make money.”

“You might as well quit your job and spend all your time trying to stay on top of the privacy changes that Mark Zuckerberg makes,” quipped John Carroll, a mass communications professor at Boston University.

“Facebook is notorious for turning their privacy settings into a moving target,” he told TechNewsWorld. “It’s a monumental task to constantly monitor your privacy settings, not only on Facebook, but all over the Web.”

The phone-scraping revelations broke as full-page Facebook ads ran in several Sunday papers in the United Kingdom and United States, apologizing for having allowed Cambridge Analytica to use the personal data of some 50 million users for political purposes.

“This was a breach of trust, and I’m sorry we didn’t do more at the time,” CEO Zuckerberg says in the ad. “We’re now taking steps to ensure this doesn’t happen again.”

“The FTC takes very seriously recent press reports raising substantial concerns about the privacy practices of Facebook,” said Tom Pahl, acting director of the FTC’s Bureau of Consumer Protection. “Today, the FTC is confirming that it has an open non-public investigation into these practices.”

Facebook ran afoul of the FTC in 2011 over sharing and publicizing members’ information after assuring them they could keep it private. It settled that case with the commission.

“This is more evidence that the FTC should have enforced its consent orders,” Marc Rotenberg, executive director of the Electronic Privacy Information Center, told TechNewsWorld. “Users can’t be expected to monitor every change in a company’s business practices.”

YouTube Aims to Put the Brakes on Online Conspiracies